Referring to this as a case study of urgent need of guarding the nuclear reactors, small modular and portable reactors with the nonconjugated conductive polymer-based protection technology to protect mankind, flora, fauna and ecology, Professor Mrinal Thakur said responsible government / administrations must wake up from their hibernation over this issue. 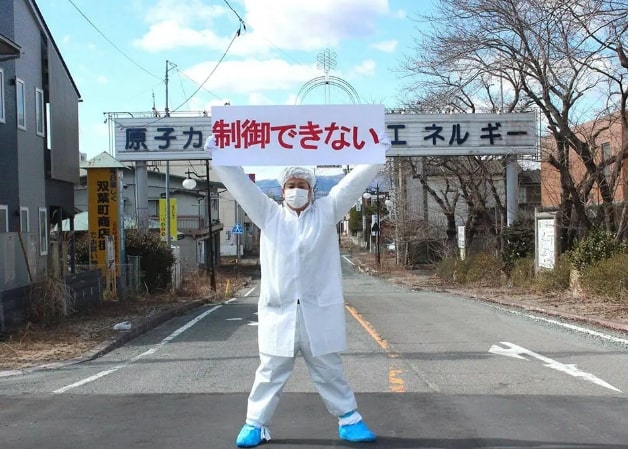 [Yuji Onuma had come up with the slogan for the gate that orginally hung above the entrance to his home village of Futaba, north of the reactors at Fukushima. It said, “Atomic Power: Energy for a bright future.” After the disaster, he went back, with a new, handwritten correction in red, “Atomic Power: Energy for a DESTRUCTIVE future.” Image courtesy of Yuji Onuma (Source: Bulletin of the Atomic Scientists).]

Referring to the earlier cases of radiation disasters of Fukushima of Japan and Chernobyl of Russia and latest case of the distribution of the KI tablets by the Lake County General Health District(LCGHD) to residents, Professor Thakur said all future power plants in India or those under construction should be guarded bythe nonconjugated conductive polymer-based protectiontechnology.

Nominated 20-times for the Chemistry Nobel Prize, Professor Thakur said there is an urgent need to seal power facilities to stop the leakage and emission of iodine with the Nonconjugated conductive polymer-based protection technology discovered by him. Radioactive iodine and its vapor travel fast through air and water. Radioiodine from Fukushima, Japan travelled across Pacific, arrived at California, USA snd caused illnesses in children. 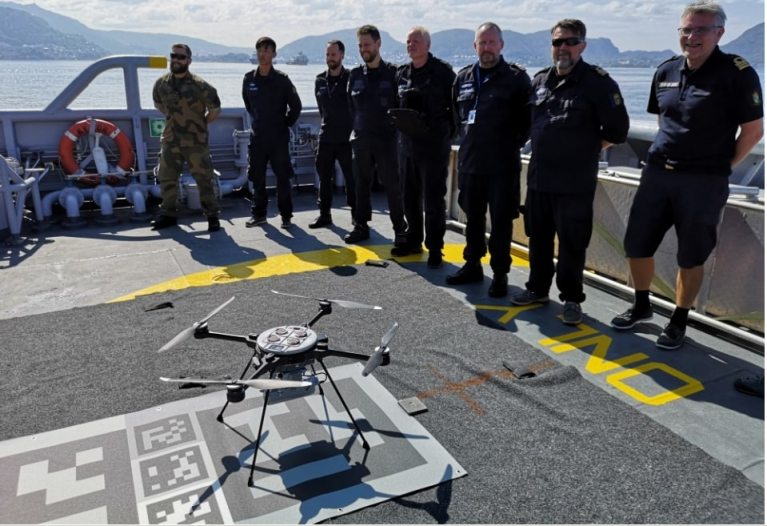 [The first drone to carry a radiation detector was tested from the Coast Guard vessel “Tor” which patrols the west coast of Norway. Photo Credit: Norwegian Coast Guard.]

Hence, all upcoming or under-construction nuclear power facilities in India and other countries must adoptthis technology without any loss of time as leakage of radioactive elements can occur in the course of normal day-to-day operations, due to accidents, earthquake, floods and any other natural calamity which may happen without notice.

Professor Thakur specifically instructed the companies to make the nonconjugated conductive polymer-based protection technology a prerequisite for construction of all (standard and small) future and ongoing nuclear power facilities and include its cost submitted to the government as an urgent budgetary provision.

Professor Thakur said distribution of non-prescription KI by the Perry Nuclear Power Plant shows the danger of radiation health-hazards from the power plants due to emission of radioiodine. The KI, when taken within a specific time frame, helps to protect the thyroid from radioactive iodine.He said such an urgency would not have arisen had the companies building power plants equipped them with the nonconjugated conductive polymer-based protection technology.

As India and other countriesare commissioning large numbers of nuclear reactors and small modular reactors for peaceful purposes, the issues of health risks and danger to ecology also assumes great significance as plugging radiation and emission of radioiodine from there has not been addressed.

Here, this technology will be of great use as the material will absorb the toxic release from the power plants, small modular reactors and movable laboratories.

Regretting the Department of Atomic Energy of Indian Government, though initially agreeing to use such protective filaments, finally did not commission it in nuclear power stations, Professor Thakur said the Narendra Modi Ministry must take immediate action to protect human lives, environment and ecology. 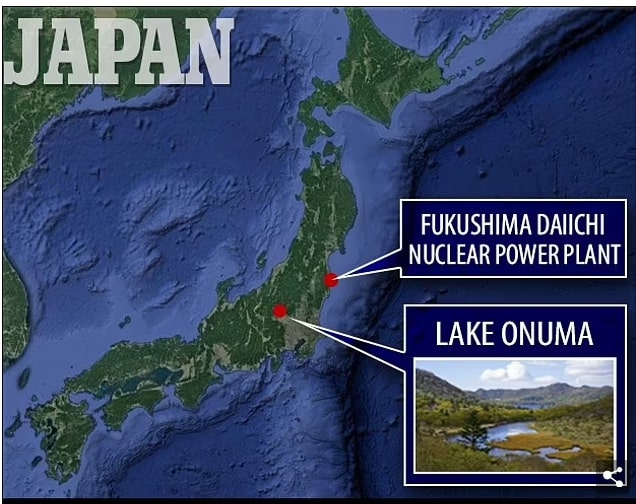 [The catastrophic Fukushima nuclear disaster in 2011 caused an estimated 250,000 people to evacuate their homes (Photo Via Reuter)]

He said the government must consider protection of power stations immediately as a day wasted in the implementation of safety measure means a day of living under threat of radiation fallout as any natural calamity like flood or earthquake can cause fissures in the walls of such power facilities allowing radioactive elements to freely escape to the environment.

Professor Thakur has sought immediateattention of Prime Minister Narendra Modi to his proposals in this regard,regretting his proposal to the government for guarding reactors with the nonconjugated conductive polymer-based technology has been lying unaddressed since 2012.

On a related note, Professor Thakur demands immediate acknowledgement of his “Nonconjugated” conductive polymers works by the Royal Swedish Academy of Sciences.His not receiving due credit on Nobel Prizes and unaddressed critical issues for 20 consecutive years is utter violation of human rights.

Most importantly, what violated the academic and ethical norms is that no credit was given to Professor Thakur by the Nobel Committee in the 2014 Nobel Prize, for his equation and the underlying experimental and theoretical works in nonlinear optics that he performed to arrive at this equation. 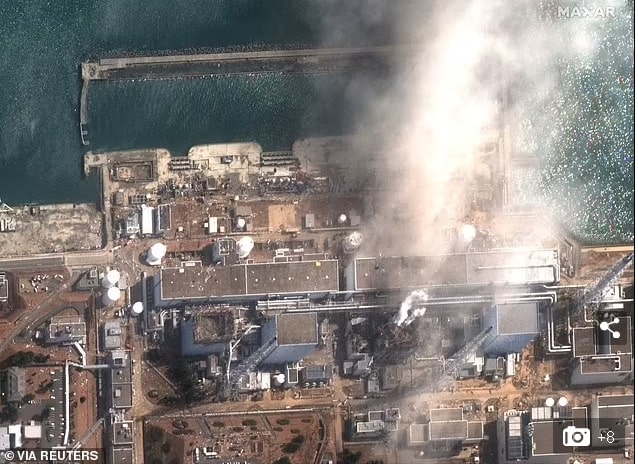 [The catastrophic Fukushima nuclear disaster in 2011 caused an estimated 250,000 people to evacuate their homes (Photo Via Reuter)]

The document preserved at the Nobel Foundation website for the 2000 Nobel Prize in chemistry is fundamentally incorrect.

Alan Heeger, A.G. MacDiarmid and H. Shirakawa, the 2000 Chemistry Nobel Laureates, made fundamentally nonfactual statements in their Nobel documents that only conjugated polymers can be electrically conductive.

Legal communications involving US attorneys have established that they (Heeger, MacDiarmid and Shirakawa) agreed that Professor Thakur’s experimental works and theory are fundamentally correct while theirs are incorrect! 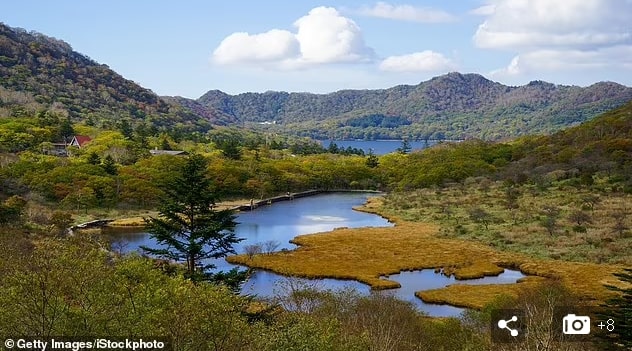 The following issues are critical and merit immediate attention:

No credit was given to Professor Thakur in 2000 Nobel Prize and afterwards for his discovery of “Nonconjugated Conductive Polymers.”

The Royal Swedish Academy of Sciences is yet to correct the document preserved at the Nobel Foundation website that a polymer must be conjugated to be electrically conductive which is nonfactual and the corresponding theory as given is incorrect.

Professor Thakur’s research funding was abruptly stopped in 2003 as he brought up the incorrectness and inequity regarding the 2000 Nobel Prize in Chemistry.

Professor Thakur stakes claim to the 2014 Nobel Prize in Chemistry as well since “Super-resolved Fluorescence Microscopy” (2014 Nobel in Chemistry)is primarily based on earlier nonlinear optical experimental and theoretical studies performed by Professor Thakur and colleagues on organic materials.

There is mounting public discontent over such issues. Accident to 27 years after the accident.